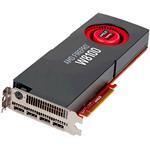 The AMD FirePro W8100 workstation graphics is based on the second-generation of AMD Graphics Core Next (GCN) GPU architecture and, like its predecessor, can perform graphic and arithmetic instructions in parallel. Compared to the AMD FirePro W8000 GPU, it now features four times as many compute engines (eight instead of two ACEs), resulting in significantly morecomputational performance.

Every effort has been made to ensure the accuracy of all information contained herein. e-nitiative shall not be liable for any changes resulting in wrong product description, tax code and/or price. The shown information (specifications, prices, taxes) should be considered as an indication and can be changed at any moment and without any prior notice.

Design and development by

These cookies ensure that the webstore functions properly. Think of keeping track of your language and your products in your shopping basked, log on with your account, the checkout form, filter search results etc.

We use analytical and tracking cookies to see how we can improve the webstore and how we can adapt content and potential advertisements to your preference.